State of Children in Indonesia

State of Children in Indonesia

Right after a recent economic boom in Indonesia, almost one third of the population continues to live under the poverty line. Since then this country has not succeeded in improving the living conditions of all its families. And also many children on the remote islands of Indonesia are deprived of enough access to food, water and healthcare.
The next state of children in this country is the high child mortality rate, where nearly more than 40% of Indonesian children die before the age of 5. Newborns, for another example, are the victims of several diseases like low weight which is very much common in this country. More than 7,500 children live in the streets of the capital. 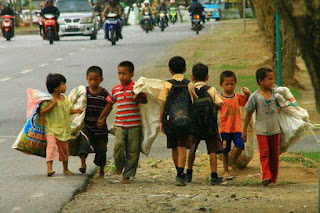 The picture was taken recently in Jakarta where two school kids pass by the five street kids. It is indeed disconcerting to know this large number of children being affected. These children, who often leave their homes after experiencing domestic violence, sexual abuse or poverty, are bound to put themselves to their own devices in the streets. They struggle to get money and food in order to survive in these unsanitary conditions. Getting married at the young age is another phase of life here. Many young girls get married before they turn 18, mainly in remote and underprivileged regions. And still the tradition continues to survive. On the other hand, many children are under child labor. As they have to meet their basic needs, most of them are bound to involve in domestics and agricultural labors.
Despite Indonesian law grants free education to everyone, this law has not been applied in all the states. A large number of Indonesian children do attend primary schools. However an alarming number of these children do not continue on to the secondary level. The need to earn money becomes a higher priority than education, which not only happens in Indonesia but in all parts of Asian countries.