Google Forms - create and analyze surveys, for free.
Create a new survey on your own or with others at the same time. Choose from a variety of survey types and analyze results in Google Forms. Free from Google.
docs.google.com
投稿者 関昭典 時刻: 11:21 AM No comments: 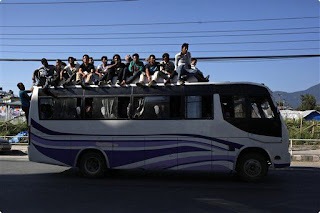 I heard two people talking to each other while I was on the roof of a bus (because I had to go to college and bus was too pack), “No one can be as patient as we Nepalese”. At that time like everyone else I was laughing but now that I think of it, it is indeed true. It’s already been more than 100 days because of the unofficial blockade daily life of people is severely disturbed.
From going to college early in the morning for students and teachers to the hardship of making an early cup of tea for family, we Nepalese are facing great amount of stress every day. The lack of fuel is just a primary problem the further problem it had risen are more critical such as difficulty in transportation, difficulty in preparing foods, shortage of medicines, closing of schools and so on. This has also raised the black market in Nepalese economy which have affected the people especially those who are in grass root level. Despite several consolations to the citizen nothing much concrete is done or has been effective on this issue.


But what is incredible is the level of patience and solidarity we Nepalese are showing and no it not only consists of people in Hilly area but common people in Terai too are showing their patience and hope to come out of this critical condition. Lastly we hope that things will get better and once again we can at least return back to status-quo.