VJEP DAY 1 - CITY TOUR
ベトナムプログラム１日目
戦争と平和について考える。
友達になる。
The first day of VJEP went by in a flash. We got to experience many new things together.
We visited the War Remnants Museum, the Independence Palace, the Central Post Office and had a small chat at the Turtle Lake. We came to learn a lot about the Vietnamese War and the effects that the war has left behind. As students who are currently living in the peaceful and modern world, we feel so sorry for those who has been suffering from the agent orange and also remind ourselves that we have to treasure our lives more.
After having a delicious meal, we all headed to our Opening Ceremony where we got to hear a talk from Mr. Duc Nguyen about himself as a person who suffered from agent orange which encourages us to work harder and became a better human being. Then together the Japanese students sang him a song and gave him flowers as a thank you.
At the end of the day, the Vietnamese students has prepared a surprise gift: Nón Lá, Vietnam's traditional hats, which were decorated by their own hands. It was so hard for them to keep a secret about the gift! But the result was definitely worth it! 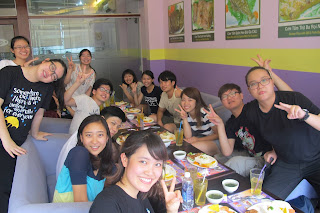 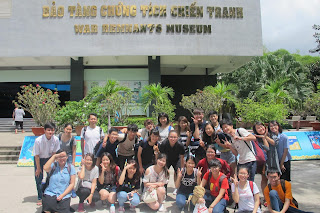